Putia Pure Food Kitchen seek local producers, artisans, growers, fishers and providores to supply us with their top quality produce. There is a real sense of responsibility in sourcing sustainable food products that nourish and taste good too. Every season has a mood and that mood is captured in the taste, the flavours, the smell and the colours of the season.

Planted in the 1940’s, The Mount Zero Olive Grove is one of oldest olive groves in Australia.

A total of 6000 Spanish Manzanilla and Gordal Olive trees line the base of the Grampians most northern summit – Mount Zero. Here we practice biodynamic farming techniques and have the international Demeter certification. The grove is self-sustaining in its farming practices – feeding the trees directly from the soil humus rather than chemical inputs and our energy supply is sourced from off-grid wind and solar generators.
The Wimmera region of Western Victoria is the heartland of wheat and grain production, these idyllic conditions for traditional crops has seen the area emerge as Australia’s premier lands for growing lentils. Mount Zero has been working with local Wimmera farmers to encourage the growth of premium lentil and grain varieties such as freekeh, farro and barley. Originating from Puy in France, these lentils grow exceptionally well in the soils of the Wimmera, and are a favourite amongst our restaurant customers. They are renowned for their deep nutty flavour and for holding their shape when cooked. A great companion to fetta, goats cheese, mint, peas, tomatoes and game.

Mount Zero Lemon Pressed Extra Virgin Olive Oil is produced in the Agrumato style of cold pressing halved lemons and olives together. This delectable blend artfully combines the flavours of Mount Zero’s fruity olives with the zest of lemon. These beautiful flavours pair well with fish, grilled meats and vegetables.

Our Chorizo sausage is produced by Salumi Australia. Salumi Australia craft consciously cured meats and fermented small goods – known in Italy as salumi – beneath the green hills of the Byron Bay hinterland. In crafting their award winning salumi range, they have consciously returned to the traditional curing and fermentation techniques that their Italian ancestors developed centuries ago. Using slow food techniques and locally sourced ingredients wherever they can, Salumi Australia believe you really can taste the difference. They embrace the tag line “ the new old flavour”. Salumi works closely with its farmers throughout the Northern Rivers Region, considered to be some of the best pork in the country. No added hormones or artificial flavourings, antibiotic free, gluten free and endorsed by Coeliac Australia. The culture of fermentation and maturation throughout Salumi’s drying and ageing processes is the key to obtaining the unique texture and flavour found in top European style smallgoods.

Salumi Australia use 100% Free Range Pork from local growers Gooralie. Gooralie is a mixed farming property situated near Goondiwindi, on Queensland’s fertile Darling Downs. Gooralie Free-Range Pork is Free-Range in accordance with Australian Pork Limited’s (APL) APIQ Free Range Certification and RSPCA Guidelines ensuring pork that is supreme in taste and tenderness. Gooralie keep their pigs in a stress free environment allowing them to be “As happy as….” That is why the quality and taste of their pork is superior.

Gooralie endeavour to grow most of their own grain. Their pigs are fed a natural, nutritiously balanced diet free of chemical residue, antibiotics and hormone growth promotants.

Australian producers typically process their olives within 24 hours of harvesting, which means AEVOO is not only the best, it’s also the freshest, because the quicker oil is squeezed from olives after being removed from the tree, the fresher it is!

Due to Australia’s ideal growing conditions, leading farming and harvesting practices, and state of the art processing techniques, Australia is also one of the world’s most awarded producers of EVOO – so Australian consumers are spoilt for choice when it comes to getting their hands on the good stuff.

As cattle and sheep producers west of Hughenden in North West Queensland for most of our working lives, we have always been passionate about the paddock to plate story. Our families have been in the pastoral industries for several generations and it is with great delight that we now have the opportunity to present a magnificent selection of handcrafted, wholesome Bunnyconnellen products to the public.

Bunnyconnellen benchmarked the quality and the integrity of our products by submitting them to the rigors of the Sydney Royal Fine Food Show every now and then. The Fine Food Show makes the highest demands on its competitors and the team at Bunnyconnellen has been rewarded with no less than 37 medals over the last several years.

Bunnyconnellen has also been awarded a Gold medal at the Vogue Entertaining & Travel Magazine awards as well as a Silver medal in the 2013 Original World Marmalade Awards, held at Cumbria, UK.

Olympus Cheese today continues the proud tradition of making Mediterranean cheeses largely by hand. They use Cypriot recipes passed from generation to generation and from owner to owner to make their signature halloumi, ricotta and Australian-style fetta, using non-animal rennet.The original Olympus Cheese factory was set up in Ferry Road, West End in the 1970s.

The business is headed by master cheese maker Michael Gavriel and produces halloumi, fetta and ricotta in bulk and domestic portions as well as variations including baked ricotta, lemon-pepper baked ricotta, sweet chilli fetta and marinated fetta. Our strict quality controls and attention to freshness and flavour are the reasons why Olympus Cheese consistently wins awards at state and national levels, including being named champion fetta in Australia’s Grand Dairy Awards for 2002.

Vannella Cheese named after mamma Pina Vanella was born in Conversano, Puglia. Conversano is also the birthplace of Vanella’s burrata, a fresh, stretched curd cheese that is filled with creamy stracciatella and then hand-tied. At 16 years old Vito Minoia, the now head cheese maker learnt how to hand stretch curds for this cheese the traditional way.

Moving to Australia the Minaia family brought a little bit of Conversano with them – first setting up in Cairns to be close to the dairy herds and buffalo and later moving to the city, to bring the fresh cheese closer to the tables where it was being served. Vannella cheese has become synonymous among chefs and providores for their variety of fresh, stretched curd cheeses that sing the traditions of Puglia, the family today continues their passion for cheese making and approach each with the same care for quality and authenticity.

Basilea Living Herb Farm grows a wide selection of Beautiful, Tasty and Healthy Culinary Herbs, Edible Flowers, Salad Mustard and Spinach Greens. Passionate about sharing the joys of these flavoursome, naturally good for you being nutrient packed gourmet greens on your plate and in your garden Basilea grows and delivers a unique range of products of living plants to suit the both Chefs and Gardeners alike. Now a second-generation family farm, Basilea Living Herbs has grown, delivered & merchandised our very best selection of Living Herbs, Edible Flowers, Salad, Spinach and Mustard Greens in to Fruit and Vegetable store around Brisbane for 16 years.

Basilea Living Herbs are delivered direct from their local farm in Burpengary, Brisbane to Stores around Brisbane by the Farmer, Sarah! The selection of herbs delivered to our stockists varies from week to week season to season. We only deliver what is at its best. We grow a wide range to herbs from the most well-known too lesser known culinary herbs, as well has some seasonal vegetables and useful remedy herbs. Basilea is an open-air farm ensuring all plants are sun hardy, giving the best opportunity of successful transplanting into your garden and longer survival rate living in your kitchen. Clear and careful planning assured the new farm was sustainable and environmentally ethical. With great pride we were able to reuse, and recycle 80% of the previous farm, and in the first 12 months water use was halved with the new design reticulated water cycle and rain water harvest system. 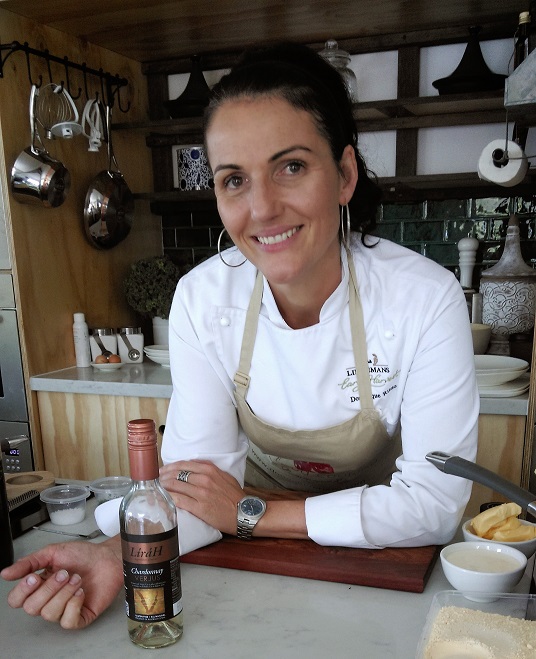 Ian and Robyn Henderson are the founders and owners of Lirah. Robyn’s family, the Puglisi’s, are 3rd generation Italian immigrants and vinegar is part of the natural mix of wine, food, and friends that makes Italian culture famous. Like all good Italian families, the Puglisi’s started a vinegar barrel to make their own wine vinegar. The vinegar barrels were started in 1969, the same year Ian was born. They were maintained, and used by the family for 35 years before Ian was granted custodianship of the barrels to begin a professional vinegar making enterprise.

Today, Lirah operates from a state of the art, purpose built vinegar making “winery” on Ian and Robyn’s farm. Set amongst the vineyards we use to make our Verjus, it is an environmentally sustainable building where all our waste products are disposed of on our property. Special permission was obtained from the Environmental Protection Agency for the construction of our facility to ensure the protection of native bushland.
Whilst the facility is modern and new, the vinegar making practices inside remain traditional, with old oak barrels used to age our red wine vinegars. Lirah takes great pride in blending old and new methods and styles under the watchful eye of our professional, highly qualified and experienced Vinegar Maker, Ian Henderson.

Pastured Produce in the heart of the Scenic Rim

Welcome to Ayton Farm, 15 minutes from Rathdowney and 30 minutes from Boonah in the majestic Scenic Rim of South East Queensland.

We are a boutique, family-owned farm producing pastured and organically fed meat chickens and eggs and pasture fed beef. We are beyond organic and use ethical, holistic and regenerative farming practices in a Joel Salatin (www.polyfacefarms.com) inspired model.

Our hens are allowed to roam freely on fresh pasture where they can consume a variety of plants and insects. Their diet is supplemented by an organic laying mash free from chemical and modified grains.